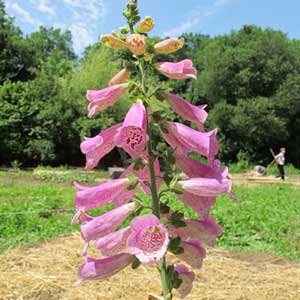 About 100 varieties of plants have been selected among those quoted by Columella, Pliny the Elder, Cato, Virgil and the recent discoveries of Pompei’s excavations such as: Yarrow – so called herba militaris because it was considered useful if kept at hand during battles; flowers like Marigolds, Daffodils, Snapdragons, white and blue Hyacints, dark and yellow Violets, Lilies and Roses for the sacred crowns to offer to the Gods together with Rosemary; Borage traditionally used to decorate the bride’s home, and as an antidote to gloom; Hyssop against lice; Mallow Cicero was so fond of; Lettuce which cured Augustus; Daisies for legionaries’ injuries; Calamint together with Rue and Savory as basic ingredients for the Moretum.